Wish I'd kept a diary: Michael Douglas looks back at marriage to Catherine Zeta-Jones, career 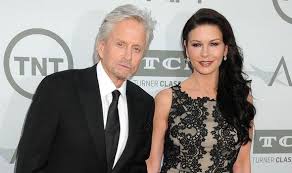 Veteran actor Michael Douglas regrets not maintaining a journal so that he could later remind himself about his career that has spanned 50 years as well as his marriage to Hollywood diva Catherine Zeta-Jones. Douglas, 74, was honoured at the Paley Centre and later in a conversation with Juju Chang, he reflected back at his both professional and personal life, according to the Hollywood Reporter.
"If you're not careful, you don't really cherish that moment or that time and next thing you wake up and its 50 years later and you go, 'Whoah what happened?'" Douglas said. "I wish I'd kept a diary a little more as a sense of a reminder. But I think you just rush along and when you reach an age where your life slows down it's too late," he added.
Douglas then talked about meeting Zeta-Jones, who is 25 years junior to him. They met at Deauville Film Festival in the late '90s. He was promoting "A Perfect Murder", while she was there for "Zorro". "I looked at her, and I said, 'Catherine, I'm going to be the father of your children'. The first time I met her! You think that went over big?" he recalled.
About his career, Douglas said he and his father, screen legend Kirk Douglas, had a similar career path. "My dad had a very similar arc. His first eight or nine pictures, he played the sensitive man. It wasn't until 1950 he did a movie called 'The Champion' - and he was nominated for an Oscar - that he played a bad guy. For me, it was Wall Street that changed my arc," the actor said.
Douglas considers his 2013 HBO show "Behind the Candelabra", for which he won won the Golden Globe, Emmy, and SAG Award, an instrumental part of his cinema journey. "I look at 'Behind the Candelabra', which came after my stage 4 cancer. I didn't think I was going to work again. Now with 'The Kominsky Method', television has been an important part of my life," he added.