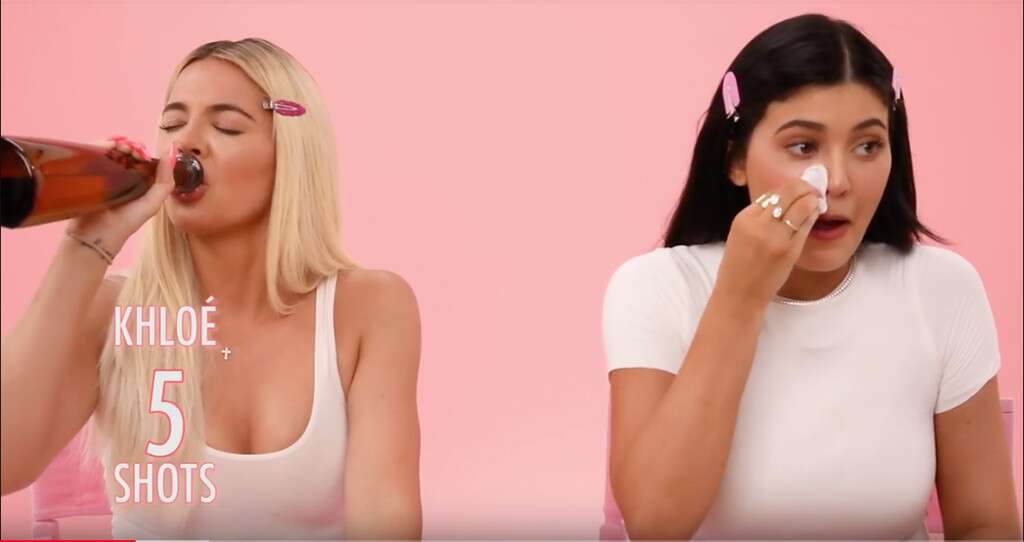 In honor of Kylie Jenner's 22nd birthday, she and big sis Khloe Kardashian are popping bottles of Don Julio 1942. But it's not for a big party like one would expect. Instead the two sisters are getting a bit tipsy for the purpose of doing their makeup on camera. And as one can predict, things get wild pretty fast.
To start, Kylie takes a shot all by herself, simply because she is bored. She then chases the shot of tequila with a big sip of Red Bull. When Khloe finally arrives, she jokes, "I used to do a Red Bull and alcohol too, but now that I am 703, I don't."
Eventually, after taking nearly five shots, they get started on the makeup portion of the video. However, there are multiple interruptions from various family members, including Kris Jenner, Malika Haqqand Sofia Ritchie, all of whom are invited but seemingly are apprehensive of going because of Kylie and Khloe's state of intoxication. Or, as Kris refers to them, they are "drunky monkeys."
Once the sisters finish their foundation and begin on their eyeshadow, a special guest arrives: Corey Gamble. Khloe and Kylie give Kris' boyfriend a warm welcome by shouting and clapping his name.
But their nice bonding moment is quickly derailed when Kim Kardashian FaceTimes them, along with Kanye West, Saint West and North West. But just as fast as their conversation begins, it quickly ends. Because Kim hangs up on them when they start cheering.
Luckily, this is when Sofia surprises the girls mid-highlighting. Although, a tipsy Khloe is distracted when she sees Kylie applying the highlighter and she just has to tell her little sis, "Wow, you look gorgeous."
Next up on their makeup routine is the blush in a shade "Baddie on the Block," which Khloe says describes her. Clearly, True Thompson's mom is the comedian in the family, because she consistently makes witty remarks about the names of the different shades.
And to round out the action-packed video, Khloe and Kylie dance to music, while also playing around behind the pink backdrop. Khloe also comes up with the idea to make it look like Khloe and Kylie turned into Corey and Sofia respectively.
In total, Khloe drank 11 shots, with Kylie following in close second at 7 shots.