Cannes 2019: Sonam Kapoor walks the red carpet like a boss, says the French Riviera suits her. 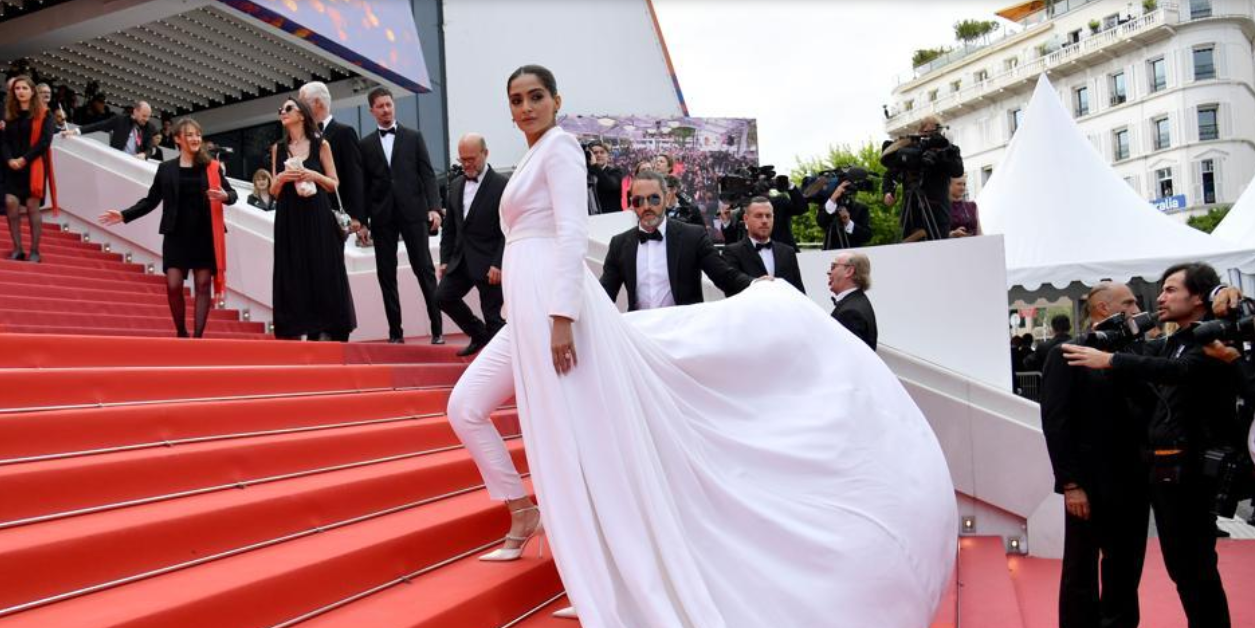 After wowing fans in her red gown, Sonam Kapoor donned an ivory white tuxedo dress on her second day at the red carpet at the ongoing Cannes Film Festival. The ivory tuxedo by Ralph & Russo had a long train adding a dress like feel to it.
Sonam paired it with a statement necklace by Chopard and Jimmy shoes. She opted for mid-parting and a tight bun for her hair styling. Sonam’s sister Rhea styled her look for the red carpet. She shared a few pictures of her new red carpet look on Instagram.
“The French Riviera suits me,” she wrote in a post.
Earlier, she made her debut at Cannes 2019 in a red dress by Valentino. She had fresh face makeup with nude pink lips and beautiful eye makeup. She also transformed into a Modern Maharani for a Chopard party in Cannes. Later, the actor wore a neon yellow gown by Ashi Studio. The flared off-shoulder gown was paired with matching stilettos.
Sonam made a stunning appearance at the Cannes red carpet last year when she wore chooda and mehendi, days after her wedding.
The 72nd Cannes Film Festival opened on May 14 and had several Indian celebrities making their red carpet appearances. Bollywood actors Priyanka Chopra, Deepika Padukone, Kangana Ranaut, Huma Qureshi, Diana Penty, Hina Khan and Aishwarya Rai Bachchan have already marked their presence at the red carpet. The festival will go on till May 25.
On the work front, the actor was last seen in the film Ek Ladki Ko Dekha Toh Aisa Laga where she played daughter to her real life father, Anil Kapoor. The film also starred Rajkummar Rao. Sonam is working on The Zoya Factor that will be based on Anuja Chauhan’s book by the same name. ““So I think it’s important for me to play characters who are normal. That’s what I loved about Zoya -- she is very normal and average,” added the 33-year-old actor,” Sonam had said about her role in the film.